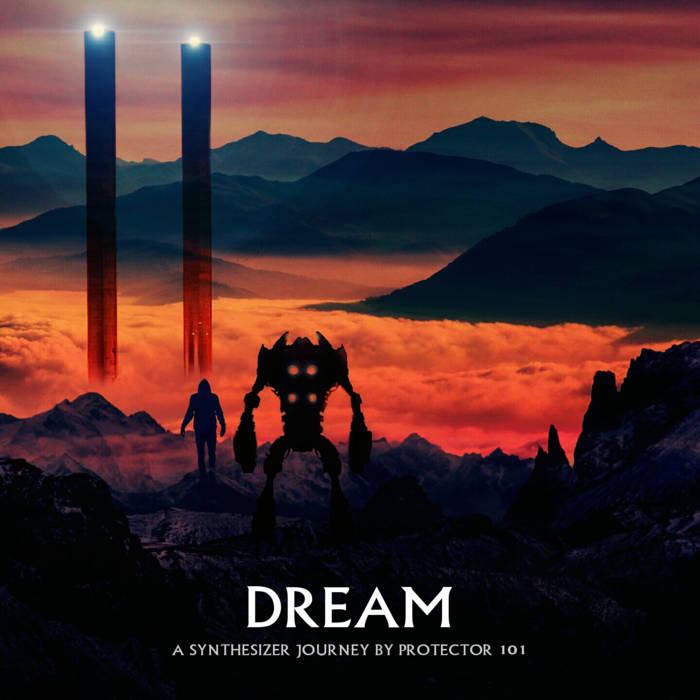 Illweevil What a journey; synthesized atmosphere does not get deeper than this and, since Dream is a continuous music reel, the joruney stays fresh. The heavy industrial and clanking metal sounds are spot on for transporting the listener to a cyberpunk dystopia while the occasional bright synths accentuates its beauty. Favorite track: The City.

SokK That's one amazing journey we have here. That's a soundtrack to a movie or a video game I'd love to see someday.
As usual, Protector 101 releases an amazing record. Favorite track: End Credits.

Jean-Paul DuQuette I'm guessing I would've been more than happy with Protector 101 producing the OST for the new Voltron. Well, we'll always have this mini-album to give us a taste of what could've been. Just wish there was MOAR. Favorite track: Battle.

MICROCHIP TERROR As a big fan of P101's soundtrack albums such as "Wastelands" and "Hunter's Journey", DREAM is such a treat ! He expanded the OST-sound by infusing more epic sci-fi cinematic vibes while also retaining the trademark P101 sound. This album showcases diversity with dreamy and melancholic moments as well as action-packed cinematic goodness + fun jingle-like tunes like the "Dancing Robot Theme". I hope someone would make an animation film based on the beautiful artwork with this soundtrack. Favorite track: Battle.

!!!ALL "DREAM" CASSETTES FROM PLAYMAKER ARE SOLD OUT!!!

Some of you may remember but back sometime in the 2015 I was contacted by the animation branch of Dreamworks Studios. The day I woke up and saw an email from Dreamworks Studios I couldn't believe my eyes, I thought maybe it might be a spam message or something. It was just so sudden and random to get such an email. I tried to keep my excitement contained. But the email was real, the contacts within that email were real, and it turns out one of the producers had heard Protector 101 and has been a fan for sometime! What they were looking for were composers to score the reboot cartoon of Voltron and asked if I'd be interested in trying out for it. Of course I said yes!

What they needed from me (and each person they were trying out) was a music reel. Something to show off what I was capable of doing musically... Soundscapes, action scenes, comedy, dark and light scenes... the whole gamut. I had to make at least 3 original tracks within just 4 days! At the time work was very busy as well as normal everyday life events so to get this material done within just a few days was stressful to say the least. I managed to come up with 6 original tracks but, instead instead of just 6 separate tracks for them I thought I'd do something I enjoy doing and make them all tie together to make one continuous story (much like Hunter's Journey or Wastelands) Hopefully this little move would have me stand out from the bunch, I thought to myself.

I don't know if it was that little move or just my music (or both) they liked but it got me in and next thing I know I'm signing NDA's and watching animated still frame scenes of the newest unreleased Voltron cartoon. Mind blown... They had me work on 3 scenes that dealt with mystery, comedy, and action. Later on they wanted me to write a theme for Voltron. These tracks I added in as bonus tracks. The action sequence they wanted to me to do two versions. A P101 style (80's synth) version and an "epic" orchestral version. Being that I've never worked with any orchestral composition and had to learn how to use new software this was quite a task!

In the end it was between me and one other person. It was close but I unfortunately was not picked for the job. But I like to share with you the material I came up within that crazy, stressful, yet exciting and fun time of my life. It was a great experience that I'll always cherish and never forget. So please sit back and listen to the sounds of what could have been if Protector 101 scored the Voltron series.

To my wife who was there (and always is) to support and give me the motivation I needed with my music during this time.